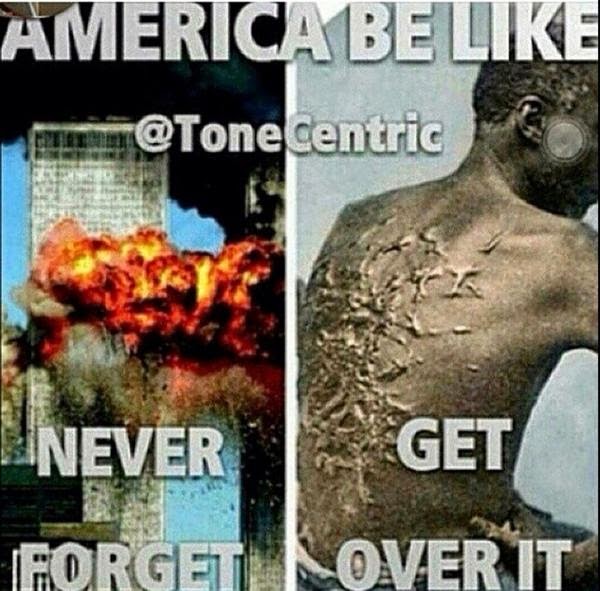 I need to explain, yes?

Before reading, take a second to rest your eyes on both images...what feelings do they bring forth?  Are the feelings different or the same?

IF one image makes you feel different than the other, how so?  Why do you think this is?

The fact that a belief system can drive a person, or a group of people to violence, and that we, as human beings, cannot exempt from the possibility...never forget...

Also vital, to keep in mind that "they" are NOT all our enemy.  I remember a story shortly after 9-11 where a Sikh was killed because the murderer was confused by the head covering.

When we eye every person who is different than we are with suspicion, we lose part of our own humanity.  If we view every Muslim as a terrorist, we miss something.

The first image appears fresher in our collective mind, but you don't see the suffering up close - we can think not about the people throwing themselves to the ground and just think about the attack.

The second image burns through our brain.  Man's inhumanity to man.

The evil that was slavery in the United States should not have happened.  But it did happen.

We need to remember the time of slavery in our country, lest it happen again.

We need to remember chattel slavery in our country's history, and remember those - even today - who are kidnapped and made slaves.

We need to remember that many people react to unjust treatment through the lens of history.

We need to remember that we all (no matter what the color of our skin) harbor some sort of "feeling" toward some group, whether it's race, class, religion, sex.  It may be a tiny seed, but it's there.

We need to remember that we have all felt that "feeling" aimed at us, by another person.

If "you" (general "you") think that you are owed money because you have ancestors who were made slaves, get over it

If you look at people who look different than you with suspicion simply because of the color of their skin, get over it.

If your "go to" assumption for everything is rooted in slavery...get over it.

That's the heart of it.

Never forget...for all the right reasons...

Get over it...for all the right reasons.