Alger Falls are so close to the road...the square shadow is my car.

My husband's sisters, Deb and Judy are still close to me and have been very good to us.

Today, Judy gave Tom as college send off (iPod cover and many $ of iTunes gift cards, all the linen needed to set up a dorm room and a check for $500...) 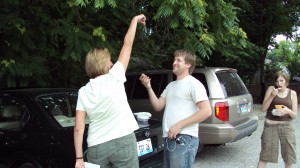 (the Nisson behind them)

THANK YOU ALL!  (Tom is being rewarded for his good choices...) Tom's getting ready to go away to college (about as far away as you can get and still be in Michigan).  He's worked hard to get his act together and I'm proud of him.

Yesterday I got into my jewelry box and pulled out the pocket watch that I had given to his father on our wedding day and gave it to Tom.  It still keeps good time, but the second hand has fallen out (so the other hands can catch on it).  We need to take it to a jeweler and have the glass taken off and the hand removed completely. 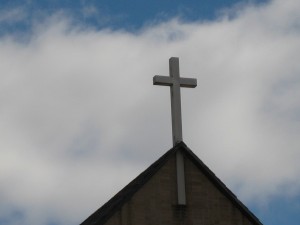 "For in this hope we were saved. Now hope that is seen is not hope. For who hopes for what he sees? But if we hope for what we do not see, we wait for it with patience. (Romans 8:24-25 ESV) MzEllen Reads:  "Save the Males:  why men matter, why women should care" by Kathleen Parker.

Yet another false rape cry.

Clearfield police said a teenage girl's claims that she was raped in the middle of a church parking lot in broad daylight are false.

In a statement sent to the Deseret News on Friday, Clearfield Assistant Police Chief Greg Krusi said laboratory test results and other evidence analyzed did not match up with the girl's claims about being attacked.

"The juvenile was formally interviewed again by investigators at which time she admitted to fabricating the story due to personal issues occurring in her life," Krusi wrote.

At least this one wasn't aimed at a real person whose life could be ruined by a "wolf" cry. Since I followed a couple of links to this site, and the sites that I followed to it are full-egalitarian (and don't seem to much care that "soft-complementarian" is different than "hard-patriarchy"...I really have no clue whether a Godly man who leads his home and church is equivalent (in the eyes of this blog-writer) to the taliban, Hitler and those who kill their daughters for dating the wrong man.

If a picture is worth a thousand words...this says volumes about what the  posters of this logo think about those who disagree with them on the gender issue.
~~~

Two girls (ages 10 and 13) are kidnapped by a Muslim "fruit vendor" who turned them over to a friend, who organized a "marriage".  Here's the thing...

The girls' uncle does not conceal his preoccupation, and denounces to AsiaNews that the Muslims involved in the kidnapping are acting as a "gang", recruiting the girls in order to "make them work in a bordello". This alarm has also been heard by the Catholic commission for justice and peace (NCJP) in the country, which confirms the words of Khalid Raheel: the kidnappers are believed to be human traffickers linked to prostitution, known to the police and under the protection of some local politicians.

New York:  Muslim stabs his sister because she was a "bad Muslim girl"

Infuriated because his younger sister was going to clubs, wearing immodest clothing and planning to leave her family for a new life in New York City, Waheed Allah Mohammad stabbed her outside their Henrietta home, prosecutors allege.Afterward, he told Monroe County sheriff's investigators that he attacked his sister because she had disgraced their family and was a "bad Muslim girl," according to court documents.

Mohammad, 22, is scheduled to appear Friday in Monroe County Court on charges of attempted second-degree murder and first-degree assault in the May 8 attack on Fauzia A. Mohammad, 19.

"Contrary to the Atlanta Journal-Constitution headline, he didn’t actually say he was innocent. He said he had done nothing wrong. That’s not the same thing. According to an earlier story on this case, he confessed to killing his daughter, and explained that he had done it to cleanse his family’s honor. When he appeared before the judge, it is unlikely that he changed this story. He just said he didn’t do anything wrong. And by the lights of the Islamic culture from which he comes, which thinks that a father killing a daughter who has sullied his family’s honor is perfectly justified, he indeed hasn’t done anything wrong. "

A popular Hamas children's television program shows a giant bunny character who is lured into stealing money — and then is sentenced by a child host to have his hand chopped off.

Contrary to "popular belief", complementarians do not teach that it's "nothing wrong" to kill their daughters, sell them to prostitution rings or stab them for going to clubs.  Nor do we make children's shows that encourage amputations as punishment for minor crimes.

To those who are attempting the comparison between godly male leadership in Islam.  NOT HELPFUL.
~~~

~~~
Another set of "black and white" twins!  (although being a fan of a certain adult beverage, I'd most likely call them "black and tan".

"No Subpar Food for Senators"

The Senate restaurants, which include not just the stately Senate dining room in the Capitol but a huge cafeteria and coffee shops scattered in the two-building Senate compound, have lost $18 million since 1993 and are slated to lose $2 million this year.

Without an immediate $250,000 subsidy from the taxpayers, they won't be able to make payroll next month. The restaurants have lost money for 37 of the 41 years they have been in “business,” but the taxpayers have made up the difference.

The food in the Senate eateries is “noticeably subpar,” said California Sen. Dianne Feinstein, who, as chair of the Senate's Rules and Administration Committee, supervises these culinary/fiscal horrors.

And the Senate that knows it can't even run a restaurant will soon vote to have the government run health care.

GORHAM, Maine -- A woman checking her laundry Wednesday afternoon found an 8-foot-long snake wrapped around the clothes inside the washing machine at her Gorham home.

The pope would not have been impressed Late last month, some leading climatologists and meteorologists met in New York at the Energy Business Watch Climate and Hurricane Forum. The theme of the forum strongly suggested that a period of global cooling is about emerge, though possible concerns for a political backlash kept it from being spelled out.

However, the message was loud and clear, a cyclical global warming trend may be coming to an end for a variety of reasons, and a new cooling cycle could impact the energy markets in a big way.

(mostly) "clean" (the only off-color one was "roof sex" and that involved furniture.  The part that made it worth watching was the apartment owner getting after the cat for scratching up the furniture).  "Western Spaghetti" is wonderful!

Photo of the week: