Today is the Jewish Day of Atonement and it brought to mind a post I wrote a while ago:

~~
When I think of "sacrifice" - the first sacrifice that comes to my mind is the sacrifice of my Saviour. The story of the scapegoat is such a beatiful "looking forward" to Christ. Too many times we read the New Testament through the eyes of the Old Testament; today I read the Old Testament with eyes fixed on Christ.

The Scapegoat by William Holman Hunt, 1854. Hunt had this framed in a picture with the quotations "Surely he hath borne our Griefs and carried our Sorrows; Yet we did esteem him stricken, smitten of GOD and afflicted." (Isaiah 53:4) and "And the Goat shall bear upon him all their iniquities unto a Land not inhabited." (Leviticus 16:22)

Aaron was to take two goats and cast lots over them - one of the goats would be for the sacrifice, the other would be for "Azazel" (KJV translates "azazel" as scapegoat; the word has two roots ez [she-goat, goat, kid] and azal [to go away, evaporated, gone])

Aaron was to do with the first goat as he had done with the bull - the blood of the sacrifice was to be sprinkled on the mercy seat.

Many people have never read this story - we know the word "scapegoat" but don't really know how Biblical it is.

The people of Israel were sinners (aren't we all?). On their Day of Atonement, all of their sins were placed on the scapegoat and sent away.

How does this relate to us?

As Christians, our day of atonement came on the day Christ died on the cross. On our Day of Atonement, all of our sins were laid upon the Lamb of God.

Romans 3:25
God presented him as a sacrifice of atonement, through faith in his blood.

Just as Aaron laid the sins of Israel on the scapegoat, so God laid on Christ the iniquity of us all (Isa 53:6) Christ his own self bore our sins in his own body on the tree (1 Peter 2:24), just as the goat bore all of Israel's iniquity on itself.

The goat went out into the wilderness. The Hebrew word is midbar {mid-bawr'} and means (among other things) "uninhabited land" - a place where nobody was. Psalm 103:12 tells us that "as far as the east is from the west,so far does he remove our transgressions from us. That's a long way. Not only that, but our sins are gone out from us, Jeremiah tells us that (under the New Covenant) God will forgive our iniquity and remember our sin no more.

Our sin is GONE and God will remember it NO MORE!

The carnival theme is "the Beauty of Sacrifice" - how beautiful is "NO MORE"? 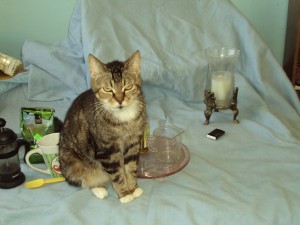