18 years ago, my daughter, Amanda, had a minor ear surgery. We brought her home and I had o rune out to get a prescription filled.

Our cat Blackie had gone missing and since the animal shelter was across the street com the pharmacy, I stopped there while I was waiting on the Rx. They were so short staffed that they weren't keeping animals that owners were dropping off, just putting them to sleep.

There was a couple there with a kid size shoe box, with a tiny tail hanging out. She was crying, but was so allergic...I said, "oh, I'll just take him."

The woman at the counter said, you can't do that IN HERE."

So we went outside and I took this tiny kitten home and he became Amanda's kitty...and we named him after her ear doctor...Henry.

Amanda doesn't remember a time without Henry. He held vigil with me when Amanda's daddy was dying, sitting in his lap for hours at a time.

He spent a little time with me here in the apartment, and was a great balcony cat.

Henry died today. He's had diabetes for 5 years, had eye problems, but Amanda, and her boyfriend, Mike, took good care of him.

Mike was crying, Amanda can't even talk, Tom's a mess and so am I.

Henry will be missed. 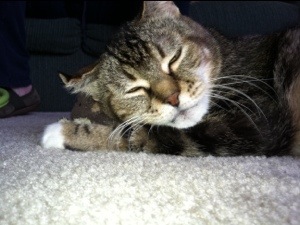