From the Acton Institute Power Blog -
Persecution Of Christians: Will It Get Worse?

Even Christian-majority states are experiencing unprecedented levels of exclusion, discrimination and violence. The 2015 World Watch List reveals that a staggering number of Christians are becoming victims of intolerance and violence because of their faith. They are being forced to be more secretive about their faith.

According to 1onews.com, “A woman’s chance of being raped in Sweden during her lifetime is about one in four which is about the same as the chance of being raped in a war torn country such as Syria or Iraq. When it comes to rape, Islamized Sweden is already in a state of war. Sweden does not publish statistics on immigrant crime. If we want a clue about who is committing these tens of thousands of rapes and other types of sexual assaults, we can look at to another Scandinavian country, Sweden’s neighbor Norway. In Norway nearly 100 percent of all Oslo attack-rapes (where the attacker and the victim did not know each other) in the last five years were committed by immigrants from “non-Western” countries. In the Norwegian city of Stavanger, 90 percent of rapes are committed by “immigrants.”

I had used Lauren Winner’s Girl Meets God once before in class, an honors freshman colloquium on the theme of metamorphosis of body, heart, mind, and spirit. On the first or second day of discussing the book, comments made by a few students surprised, stunned, and, ultimately, silenced me.

“I wasn’t raised with any religion,” one student said, “so I can’t relate at all to this book.” A couple other students agreed.

Dear Mom and Dad (and whomever else I made a hypocrite in the eyes of God), the letter-essay begins.

I suppose all the baptismal water has evaporated out of my pores by now. Every inch of my body must scream sin to you. I wonder what happened. When did I make you feel that you failed as a disciple of Christ? I am sorry that I made it impossible to keep the promises you made twenty years ago while I was crying in your arms in a gown of white. I feel guilty knowing that even though you believe in the existence of heaven, you do not have the reassurance that you will meet me there one day. I am sorry I do not believe in what you do.

Summary of the OIA Method

I'll be referring to this often, I think.

Why are 'Christian movies' so bad? Talking about Jolie, Zamperini, 'Unbroken' and wisdom from Robert Duvall...

I feel exactly this way about a "Christian book" that I'm reading.

"Change Your Thinking on the Role of Government‏"will make you think - it made me think again.

The media is completely missing the most important point of the Eric Garner story. A precious life was ended and the entire City of NY is in disarray because of overreach of government. The problem here is that there was a law against selling a single cigarette. Why? The law was passed because taxes would not be collected on that cigarette transaction. The police are therefore overburdened and over-empowered. They can’t possibly be operating on a “right v. wrong” mindset. There was nothing immoral about what Mr. Garner was doing; he was simply not complying with man’s law to control – or enslave – its citizens.

Why Do Black Lives Matter?

“Black lives matter.” “All lives matter.” These slogans may forever summarize the deeptensions in American life in 2014. Catalyzed by the deaths of Michael Brown, Eric Garner, and two New York Police officers who were murdered while sitting in a police car, Americans are in the midst of a crisis of human dignity. Are we still able to articulate why anyone’s life matters?  We can loudly protest that “Black lives matter” but it will mean nothing in the long run if we cannot explain why black lives matter.

Black lives matter not simply because they are black but because blacks are persons—persons who are a necessary variable to the flourishing of others so that we all may attain the end for which we were created.

Gay Weddings and the Shopkeeper's Dillema -

One option for pro-marriage business owners: obey the law and serve gay weddings, but make it known publicly that you believe that the law forcing you to do this is unjust, needs to be changed, and is obeyed only out of your respect for law and the democratic process.

But the small, mom-and-pop shops have always been something more than a means for their proprietors to escape poverty and participate in the American Dream. They have also been family businesses, employing aunts, uncles, in-laws, and older children. Thus, they have generally reflected the attitudes, values, faith, and hopes of a small, tightly knit family group within an intimate work setting.

and in the "I need to go shopping" category...

And the larger, NASA version...

I have heard it said (correctly) that the early Christians faced a moral world that in either the same depravity, or worse than what we see now.

Well, farther back than that.

If the Hebrew people had not lived surrounded by idolators and other evils, they would not have fallen in WITH them. So the evidence is that their world saw evil, as ours does.

The Jews just before Christ had forcibly dispersed, and some had returned; and the evil that they saw was as evil as today.

I think (purely subjective) that today seems more difficult for us because it appears so new to us. And (objectively) we do see things that we have NEVER seen before.

Was immorality rampant in 1st Century Rome? Absolutely. Was it worse than today? I don't know. Some say yes, others say no.

I think that we feel it more because Western Christians have long enjoyed "majority rule," thus staying safely wrapped in the insulation of tunnel vision.

The phrase "total depravity" best describes the world, and always has. We expect it.

We grieve - yes, for that depravity, but we grieve having to stand by, seemingly helpless, watching the DECLINE of our country and culture, at a breakneck speed.

Homosexuality is the best example.

Only a couple of decades ago, we (collectively) viewed same-sex-sex as abnormal. We knew gay people, we loved them as friends and family, but we loved them, not their chosen lifestyle.

Gay people sometimes (perhaps often) faced bullies and that should never have happened. People should never see bullying as acceptable.

In (culturally speaking) a very short amount of time, we see a decline.

- A move away from the traditional family unit with the introduction of "consequence free sex" and "no-fault-divorce" (note: we do find good and Biblical reasons for divorce, and I don't find "nobody's fault" on the list.)

- With the traditional family unit undermined, open acceptance of the homosexual becomes tolerated by the culture

- As single motherhood becomes more acceptable, homosexuality becomes not only tolerated, but acceptable as a viable option.

- Demand of recognition of gay relationships becomes more popular, as does public spending for single motherhood.

- The demand to see homosexual relationships as identical becomes the demand for culture (via "we the people") to sanction these relationships.

As Christians today look around and see our spiritual siblings SUED and FORCED to provide services to ceremonies found morally offensive, I find myself able to identify with Christians in other times and places, who steep in total depravity through no fault of their own.

Is the "remnant" ready? I want to be part of the remnant - and I know I'm not ready. If the "steps of grieving" can be applied to this - I'm still in the "denial stage" but we need to get ready.

We need to be in the world, but not of the word. Persecution awaits, Jesus promised. Whether we will be found worthy of the persecution that HE endured, is yet to be seen.

My (sometimes) weekly collection of interesting links, along with a few sprinkled thoughts...

Lesbian students sue a Christian school for expelling them for breaking the rules.

We know that persecution is on the way...the more we cling to orthodoxy, to historical values and truths...the closer it gets.

Think that the use of WTF? is offensive?  So is the murder of unborn children.

(From the Heritage Foundation:  If Government Spending solved recessions, we would never have recessions.) 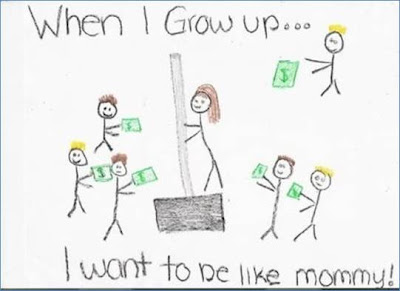 How long did it take?

It's not as if it surprises me.

A quote by an early women's movement leader:

“We have made a fetish of the Bible long enough. The time has come to read it as we do all other books, accepting the good and rejecting the evil it teaches.” --Elisabeth Cady Stanton

If favorite books in the Bible can be judged by the amount of underlining, highlighting and note-taking, mine is Philippians.

The first thing I have underlined is v.1:6 -

Being confident of this, that He who began a good work in you will carry it out to completion until the day of the Lord Jesus Christ.

The note that I have in the margin reminds me that Paul was in prison when he wrote this - and still he wrote of peace and joy, surety and grace.

I am reminded that for the "remnant", persecution brings strength. There are places in this world where Christians are truly persecuted - tortured and killed; fired from their jobs. They watch their families tormented.

And still they praise our God. May we remember the persecuted church; pray for them daily - pray for strength and courage, pray that God will change the hearts of those to hate them. Pray that God will be glorified in all.