It strikes me as I sit at the end of a (nearly) four mile hike that my "diet walk" bears certain similarities to my spiritual walk.

If mapmywalk says I burned 400 calories, I can eat 2 Cadbury Cream Eggs.

Maybe the reward system works: As long as the "treat" doesn't impinge on my "bad foods" list (gluten, potatoes) maybe the system works. As a bargaining system, I think...not so much.

Does the mindset make a difference?

If I use {that} as a reward because I did so awesome on my workout (tomorrow's plan is an 8 mile, Quicksilver end-to-end hike) then my goal is still the workout, with the treat at the end.

Turn that around...I want {that} so much, that I'm willing to do the difficult workout in order to get it. The goal is the treat, with the workout as the obstacle. The {that} is controlling my behavior.

I don't know how to tell the difference. I might need to work on that.

How do these work together?

I started "The Daniel Plan" by Rick Warren (and others) - yeah, yeah...same old, same old.  But as something to work through, there might be some meat there.

Consider the introduction of the book.

Friends, I’ve been a poor steward of my health and a terrible example for you. While we’ve been helping many around the world, I’ve ignored the problem here at home.

So today I am publicly repenting, and I ask for your forgiveness! God expects us to take care of the bodies he has given us, but I have not done that. Now, I’ve only gained two to three pounds a year, but I have been your pastor for thirty years. So I need to lose ninety pounds! Do any of you want to join me in getting healthy?

Committing to giving my body to God first, is a way of putting the physical focus on Him, away from me.

Yet, in this season of Lent, of preparation, of looking forward in time to the work of Christ on the cross...it seems like a good time to start this way of thinking about health.

My body is not my own, it was purchased by Jesus, with His blood.

Today we make the same common mistake Greek philosophers did thousands of years ago. Aristotle, Socrates , and Plato believed in dualism, 4 which included the idea that your mind (or spirit) is important, but your body isn’t important spiritually. They devalued the body. In fact, some Greek philosophers taught that your body is evil, so it really didn’t matter if you messed it up.

The Bible tells us the exact opposite. Your body is holy because God made it, and everything God makes has a purpose. We are to bring glory to God with our bodies, so we can’t compartmentalize our lives and think that we can divorce our bodies and live as if only our spirit matters. God owns your body!

Chicken breast and brown rice; sauce is apricot all fruit with chipotle powder. Side of broccoli...dinner done!

Interesting week, in which I discovered a couple of things.

I'm working the detox and discovery part of "The Plan" and 2 things:

When you're in the discovery phase, you can plan to lose 1/2 pound a day (if you're sticking to the plan.) If you find a food that **you** are reactive to, you can bump up a pound.

Almonds (which are non-reactive for most) apparently give me a horrendous sweet tooth - and cause me to bump up a pound (although whether from the almonds or from the falling to forementioned sweet tooth, I'm not sure)

white bread - makes me feel icky and bloated and gives me insomnia leaves me to think (because of the 1/2 pound weight loss) that I'm not **reactive** but am sensitive to gluten.

It was such a sucky diet week I didn't even weigh myself. I purchased the book "The Plan" and I'm shopping tonight for the 3 day detox. They say the "cranky stage" of detox last about 3 days and this is a 3-day weekend so hopefully I'll be good on it.

Sometimes it has felt like the healthier I eat, the harder it is to lose weight and if this book is right, it explains a lot. I'll try anything once...

This week I took about 3 short walks and none of them set off major achilles pain so that's good. The weather hasn't been very encouraging for walking outdoors, but I did take a group of students for a walk in the woods on a sunny day. One of them had surgery on her foot over Thanksgiving and is just now back at school (she's vision impaired and using a white cane; using that and crutches at the same time is...impossible so she was at home) - anyway, her good leg is about 30% larger than the one she hasn't been using (hopping and crutches at home where she knows her environment) so we want to get her up to speed and that means walk, walk, walk. Today we're going into the community and we're planning a shopping trip and I'd like to get about 3 geocaches in the Hobby Lobby area. 😉

My vicodin intake is less than it has been so I'm happy about that. At the worst of this I was taking 6 vicodin a day and I'm taking about 2 1/2 a day now (the lowest dose, 5mg.)

On the sciatica front, I haven't noticed major tingling so hopefully that means that piriformis swelling is getting a little better, although I feel like I'm chasing the pain down my leg. The main point of "big pain" remains on the outside point of my hip, with "pulling pain" at my tailbone. That pressure sets off my hamstring, which is tight as a drum, according to my massage therapist, and that (in turn) pulls on my Achilles' tendon.

I spend a major portion of my time at home leaning against my bad. (explanation: I have a tall bed with storage underneath and it's just the right height for me to put a couple pillows under my top half and stretch my hamstring and Achilles' tendon for my bottom half) 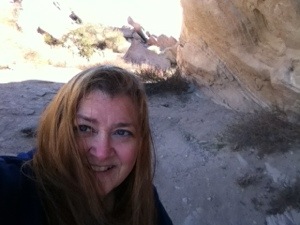 New Year's Resolutions for the year...

Weight Watchers for 3 solid months, to see if the plan will work (as opposed to hard core Atkins)
Exercise 3 days per week

6 book/movie/music etc. reviews each month
blog daily, giving myself 2 days each month "grace"
once blog post on sermon notes
participate in photo scavenger hunt one time per month
comment on another blog 5 time per week.

Misc. Read a little each day.

I just read that coffee has a protein that reacts in the body in the same way gluten does. If gluten keeps me from losing weight, is drinking coffee defeating the weight loss goal of going gluten free.

Think I'll try going Yerba Matte for a while to see.

I've been "easing" toward different eating habits over the last few years, but mostly playing with it.  Eating "Primal" for breakfast doesn't do much good when you throw in a Snicker's bar for lunch.  A couple of years ago I gave up wheat for Lent and was surprised at the difference.  Now, I go for a few days, then slip.  (Today is "day one" after lunch yesterday.)

The "Primal Blueprint" is the plan that I like best.  The author's blog is "Mark's Daily Apple" and I've gleaned a lot (including recipes) from that site.

There's also "Paleo" - the biggest difference is that Primal is a lot more flexible.  A little dairy, a little rice, morning coffee...

Both emphasize "clean eating" - but their basis is not my basis.  I read "Cultured Mama" who wonders if "paleo/primal" is Biblical?   Granted, they base their eating plans on the assumption that humans evolved into eating whatever they eat.  I believe that God created humans fully evolved.

However...God gave us food.  And it does seem to indicate that (in the beginning) humans were vegetarians.

Genesis 1:29
And God said, “Behold, I have given you every plant yielding seed that is on the face of all the earth, and every tree with seed in its fruit. You shall have them for food.

Not until Noah, did humans have the "green light" to eat meat.

Where does that leave primal/paleo?

1 - in order to answer that, you need to separate the eating plan and science, from the philosophical reasons for creating the plan.  If you take away "evolution" reasons, what you are left with is a basic "grain/legume/frankenfood-free" eating plan that encourages you to choose foods that have been raised cleanly and without hormones, additives, artificial fertilizers.

Remember - NOBODY  EVER DIED FROM NOT EATING WHEAT.

On the wheat topic - what kind of wheat?  What we know as "wheat" today is very different than even the wheat that was grown 50 years ago.

Well for starters, the wheat we eat today is not the same wheat of 50 or even 100 years ago. Since the demand for wheat is so high (second biggest crop in the U.S., second only to corn), scientists have been genetically modifying the plant to make it grow faster and produce higher yields. This means that wheat is not rich with nutrients and health benefits like it once was.

Wheat now qualifies as a "frankenfood" - also, check out this article on "wheatbellyblog"

I guess this turned out to be about wheat - and that's okay.  Every time I eat wheat, I cough.  And cough.  Clue bus?