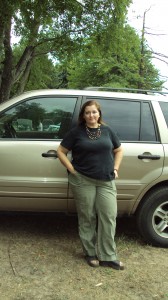 This relatively short book tells a story of faithfulness.

In one day, his livestock were stolen, his sheep and his servants were all killed.

While he was still hearing this news...another messenger arrived.

All of his sons and daughters were killed.

At this, Job got up and tore his robe and shaved his head. Then he fell to the ground in worship and said,
"Naked I came from my mother's womb,
and naked I will depart.
The LORD gave and the LORD has taken away;
may the name of the LORD be praised."(Job 1:20-21)

In the midst of everything...Job grieved for a time...and then praised God.

And we can too.  There is a time for grieving, but if we praise God through it all, we learn and grow.

“And we know that in all things God works for the good of those who love him, who have been called according to his purpose.” (Romans 8:28)

“Not only so, but we also rejoice in our sufferings, because we know that suffering produces perseverance; perseverance, character; and character, hope.” Romans 5:3-4,

And nobody can snatch us out of His hand

Romans 8:35-39, “Who shall separate us from the love of Christ? Shall trouble or hardship or persecution or famine or nakedness or danger or sword? As it is written: ‘For your sake we face death all day long; we are considered as sheep to be slaughtered.’ No, in all these things we are more than conquerors through him who loved us. For I am convinced that neither death nor life, neither angels nor demons, neither the present nor the future, nor any powers, neither height nor depth, nor anything else in all creation, will be able to separate us from the love of God that is in Christ Jesus our Lord.”