This is a "repost" - as I'm learning what I do and don't like about this blog, I'm finding that some of the "pages" should be "posts". So, this is now a post - and I'm deleting the page.Scripture alone.

I’m going to start with what I believe to be true, starting with the “Five Solas”.

I am pretty new to Reformed Theology, but once I got my mind wrapped around the idea that what I grew up with had more problems than what I wanted to deal with, I embraced this. I also chose one of the more liberal Reformed demoninations (on purpose).

Anyway…my belief about Sola Scriptura is that the Holy Scriptures are our final authority. It is not that we don’t recognize any other authority - we recognize our spiritual mentors, pastors, etc. But all of the other authorities are measured against Scripture.

If a person tells me that something is permissible, but the Bible says that it is not - the Bible wins (example: homosexuality).

If a person tells me that something is not permissible, it is up to him to show me in the Bible where the law comes from (example: having a drink with dinner).

If a person is teaching a doctrine that is not in the Bible, that doctrine is rejected (Tongues as the sign of the New Covenant).

I’m not such a big fan of Martin Luther, but this is what he said, “Unless I am overcome with testimonies from Scripture or with evident reasons — for I believe neither the Pope nor the Councils, since they have often erred and contradicted one another — I am overcome by the Scripture texts which I have adduced, and my conscience is bound by God’s Word.”

I also have problems with parts of the Reformed confessions (as does my church) and the confessions are not my authority, the Bible is. However, when they put things in a better way than I can come up with, I’ll quote them. The Belgic Confession says, “We believe that [the] holy Scriptures fully contain the will of God, and that whatsoever man ought to believe unto salvation is sufficiently taught therein…Neither may we consider any writings of men, however holy these men may have been, of equal value with those divine Scriptures nor ought we to consider custom or the great multitude, or antiquity, or succession of times and persons, or councils, decrees or statutes, as of equal value with the truth of God… Therefore, we reject with all our hearts whatsoever does not agree with this infallible rule”

In short, every authority, every standard and every message must be examined against the Scriptures. There is no man, no tradition that has more authority than the Word of God.

Salt, when dissolved in water, may disappear, but it does not cease to exist.
We can be sure of its presence by tasting the water.

Likewise, the indwelling Christ, though unseen,
will be made evident to others from the love which He imparts to us." 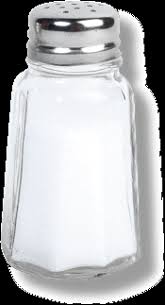 I'm thinking of the persecuted church and even (a little bit) of where most of us are. Salt is a good thing - it's good for flavor and it's good for preserving things. But (think of the water again) if there is too much salt, we don't like it very much.

A couple of years ago my class made ice cream and we needed rock salt. One of the students was determined that he wanted to taste the salt and finally the teacher let him taste it. He was also determined that he was not going to let on how bad it tasted and how badly he wanted to spit it out. So he just sat there with a very funny look on his face until it all dissolved; then (and only then) he went to get a drink of water.

2 Corinthians 12:10 For the sake of Christ, then, I am content with weaknesses, insults, hardships, persecutions, and calamities. For when I am weak, then I am strong.

As Christians, we should not expect an easy life! We are the salt and if we get to "salty" the world will want to spit us out. We don't see much of that in most of the places that we live. We see some of it, and most of it on the part of peers, not the government.

As salt, Christians can function as both a preservative and a flavoring. And we can be "too strong" for the world's taste in both ways.

Unbelievers can feel "uncomfortable" when a Christian walks into a room - the Christian doesn't have to say anything, but the jokes or stories stop...this is preservative. If the Christian is "too salty", the group will just leave and the Christian may feel downright unwelcome.

As flavor, it's the same way - our saltiness can lose friends! A while ago I had a friend who was doing some things that were causing "issues". I spoke up and it was a long time before we spoke again.

But this is a good thing!   It is through these trials and tribulations - persecutions - that we are assured of our ability to stand.  God provides these opportunities for growth.

So I'll leave you with this "salty thought" - keep being the salt, we are the salt of the earth!

Romans 12:12 Rejoice in hope, be patient in tribulation, be constant in prayer.