Reformed theology has a term: monergism. The Century Dictionary defines it as follows:

"In theology, the doctrine that the Holy Spirit is the only efficient agent in regeneration - that the human will possesses no inclination to holiness until regenerated, and therefore cannot cooperate in regeneration."

We are slaves to sin, nobody comes to the Father unless the Father calls them. Through regeneration, we are given the ability to have faith, to repent, to turn to Christ - all of this is a gift, it is not of ourselves.

The other part of the equation is also not of ourselves - grace, salvation and justification.

What we all know is that salvation is the beginning of God's work in our life. At salvation we are justified - declared right with God. Beyond that, God continues to work in our life, to "grow" us, make us mature - we are being sanctified. This is what the James (the New Testament writer) means when he says, "faith without works is dead".

1) to render righteous or such he ought to be

2) to show, exhibit, evince, one to be righteous, such as he is and wishes himself to be considered

3) to declare, pronounce, one to be just, righteous, or such as he ought to be

Romans 3:28
For we hold that one is justified by faith apart from works of the law.

1) to render or acknowledge, or to be venerable or hallow

2) to separate from profane things and dedicate to God

a) consecrate things to God

b) dedicate people to God

a) to cleanse externally

b) to purify by expiation: free from the guilt of sin

c) to purify internally by renewing of the soul

Hebrews 10:14
For by a single offering he has perfected for all time those who are being sanctified.

What are these things - what is the difference?

There is another definition (and one that fits with Strong's as well) for "justified". " To assure the certainty or validity of" - Strong's says "to show, exhibit, evince, one to be righteous, such as he is and wishes himself to be considered".

In some ways, the book of James appears to contradict salvation by faith - what happens if we use this definition written out (although a close paraphrase will need to be used, for grammar's sake)?

"Was not Abraham our father 'assured of the certainty' by works when he offered up his son Isaac on the altar?"

I have to ask a couple of questions

- Who was assured? Not God - He knew what the outcome would be.
- Assured of what? Not only was Abraham assured that he (Abraham) would stand, he was also assured that God would provide.

HERE IS A VERY IMPORTANT POINT: When we think about which defintion to use ("freed of guilt" vs. "to assure the certainty of"), remember this:

In a very real way, Abraham's faith was declared/vindicated/proven/assured on that day. We each go through these experiences, when our faith is proven - to ourselves and to others. They are most often not as dramatic as Abraham's experience on that mountain, but to us, they are just as real.

There is no secular definition that I could find - but from reading the definitions from Strong's - it is an ongoing process. Read the verse I gave - "Those who are being sanctified."

Let's go back to monergism. God will not regenerate, save, justify us and then just leave us to our own devices! No! Of course not.

He continues to work in our lives.

Sanctification, therefore, is the process by which the Holy Spirit does His work in our hearts and lives to make us sanctified. I am a long, long way from "there" - but Jesus works in me daily.

This means that I AM SAVED. Period. And yet, that is not all there is. If my faith is real, if I am "regenerate", there will be more - God continues.

As James said, "Faith without works is dead" - I have a live faith and I am justified and I am being sanctified.

The same article by Warfield tells us that the Reformed and Lutheran views of sanctification include:

(1) We are still dependent on God, yet we are able to co-operate with Him.

(2) The means of sanctification are either internal, Through such as faith and the co-operation of the regenerated will with grace, or external, such as the word of God, sacraments, prayer, Christian fellowship, doing good works, and the providential discipline of our heavenly Father.

(3) Through sanctification, the Spirit gradually completes the work of moral purification commenced in regeneration. The work has two sides: (a) the cleansing of the soul from sin and (b) the spiritual growth of the Christian.

(4) The work proceeds with various degrees of thoroughness during life, but is never finished this side of the grave.

There are denominations/theories that do not agree with this view.

1. Pelagianism says that a man is perfect who obeys the laws of God to the measure of his present natural ability. This means that if you are doing your best, that is good enough. This leaves God out of the equation.

2. Mysticism tells us that perfection consists of "becoming one with God" - this may be attained by anyone through persistent detachment of self and meditation on God.

3. Roman Catholicism and similar denominations (it appears to me) seek to see justification and sanctification as parts of the whole. They teach an initial grace, after that salvation must be earned, with conformity to the law of God; attained by means of meritorious works and penances, prayers, fasts, acts of voluntary self-denial, and ecclesiastical obedience and we can merit this perfection for ourselves.

4. The Wesleyan/Arminian theory of sanctification - I am not sure that I agree with the article, primarily because within Arminianism/Wesleyanism there is a broad range of views on this. What I can tell you is that whenever sanctification is seen as a work of human hearts and not the work of the Holy Spirit, legalism abounds.

We cannot have sanctification unless we are first justified. If we go through life without growth (sanctification) our justification was not real.

Justification and sanctification are two very different things, and yet they go hand in hand in the lives of believers. You cannot have one without the other.

Another link to read: John Piper.

I can't look at blogspot blogs at work (it's ok if we surf appropriately on our break).

Seriously - blogger is WEIRD! It doesn't matter what blog I got to, I get the same blog (but a different blog every day).

Yesterday, it was a photo blog of an extremely(!!!) pregnant woman and today it's a "dstien" - apparently a missionary (Dave Stienstra) to Nicaragua.

I don't know why it would do this, and it's very consistent.

A while ago (several years) we went to see an exhibit at the Field Museum in Chicago on "The History of Chocolate". I was amazed! We are not the only ones who see chocolate as something "sacred". 😉

(The exhibit will be available through 2011!)

I discovered that people have been growing and using chocolate for nearly 2,000 years! (That's beautiful)

The people of Central American and Mexico not only used Cacao (chocolate) as a drink to enjoy (although they did not grow "sugar", so it was a more of a bitter drink, like coffee), they used it for ceremonial purposes - and it was so valuable that they used cacao seeds as money.

For us, today - we just like chocolate. (My daughter got some "creme brule white chococlate" - wonderful!) We like it white, milky, dark, extra-dark, solid, liquid and anywhere in between. Sometimes I think that chocolate will make just about anything taste better. A lot of people add cocoa to their chili recipe. We get chocolate from (and give chocolate to) our sweeties - including our parents and kids.

At the risk of offending anybody, this is one of my favorite ways to consume chocolate: 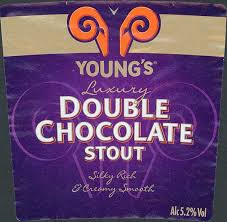 Yes. Chocolate beer.
If anybody out there enjoys an cold brew once in a while, this is very dark (VERY dark). but very smooth...Yes. It surprised me - I bought it out of curiousity, thinking it would be terrible...but I have two favorites, this one and another with chocolate undertones.Chocolate...it's a beautiful thing.