All racist theologies have the same basic core ideas and methodology. Thus it does not really matter if we are talking about the KKK, the Nation of Islam or Black liberal theology, their focus is always on skin and not sin; race and not grace; gossip and not gospel. Racism is always focused on the outward instead of the inward because it cannot deal with the root problem of sin. Hatred and violence feed on bitterness and racist rage. Class envy does not help anyone in this life or in the next. Blaming others for one’s own sin and guilt will not solve the problem. We must take responsibility for what we do in life instead of blaming “the man” for our failures and woe. This is why we need to break the shackle of black liberal theology which enslave the black man and keeps him poor and angry. May God use this study to liberate black men and women from the lie of Black Liberal Theology.

I found this helpful and expansive in thinking about the gospel.  Sin is defined more broadly than mere action - it is our nature.  The work of Christ pays not only the penalty but crushes the power of sin, thus it has day to day relevance to Christian practice.  And the benefits of the gospel are so much more than just forgiveness of sin or eternal life.

A recent survey on the environment found that seventy percent of people worldwide think that the planet is running out oil. Only less than one quarter believe that there is enough of it to keep it as a primary source of energy. Petro pessimism runs especially high in the United States where a full two thirds think that the point of depletion is within sight.

Unfortunately, the majority of what lay people in churches hear these days regarding Calvinism is by those who are vehemently against it, and rarely if ever are the truths accurately and fairly presented.  As a result, those who disagree with the doctrines of grace are not so much disagreeing with the truths so much as they are disagreeing with the caricatures wherein they have been so poorly packaged.  If you want to know what Calvinists believe, listen and read from the Calvinists, such as this seminar by John Piper.  You still might not agree, but at least you will know that your disagreements are with the facts and not with a false representation of them.  For those of you who do believe in the doctrines of grace, you will find this seminar incredibly enriching and encouraging as scores of Scriptures are unfolded for you.  Calvinist and non-Calvinist alike should appreciate the balanced, humble, and accurate approach Piper takes on TULIP.

The Reformed Mafia on Paedobaptism

By the power vested in me as a founding Don of the Reformed Mafia, I hereby dub R.C. Sproul Jr. an honorary member of the Reformed Mafia for the duration of this post. With that, I want to share an article Sproul Jr. has written. It was sent out via email from the Highlands Study Center last month. I hope it is edifying as well as thought provoking. [Edit: the article was written in response to a question from which the title cof the piece also comes.]

A northern Kentucky man is in jail today – serving a 180-day sentence – because his 18-year-old daughter failed a math test and didn't get her General Equivalency Diploma, or GED, as a previous court order required.

I liked it...I really liked it. It really got panned by some of the critics...who seem to think it's a movie aimed at an adult crowd. Get a grip - it's a kids' movie! In a time when even kids' movies are filled with violence, bad language and sexual innuendos...this one is not.

It was an adventure movie that is "family safe". I don't remember any bad language. There was no sex, a little mild violence (catapulting lizards at the bad guys and nobody gets hurt).It was people battling nature, people battling self and people NOT battling with greed and self.

It was one little girl against the bad guys and calling out for help from a very unexpected place.

It was one man against nature.

It was one woman against her self.

Synopsis
Anything can happen on Nim's Island, a place where imagination runs wild and adventure rules. Here, a feisty young girl named Nim (Abigail Breslin), surrounded by her exotic animal friends and inspired by legends and books, leads an amazing tropical existence that mirrors that of her favorite literary hero: Alex Rover, the world’s greatest adventurer. When her island is threatened she reaches out to her hero for help. But what Nim doesn’t know is that the acclaimed author of the Rover books is, in fact, Alexandra Rover (Jodie Foster), a retiring, fainthearted recluse locked away in a big city apartment. Now, as Alexandra nervously ventures forth into the world and Nim faces the biggest challenge of her exciting young life, they must both draw courage from the fictional gallantry of Alex Rover, and find strength in one another to save Nim’s Island. An adventure comedy, Nim's Island is about becoming the hero of your own story -- as a girl who thought she was alone and a grown woman who thought she was scared of the world discover they can be so much more than they ever dreamed. The "T" matters because all have sinned and there are none that seek the face of the Lord.

If there are none that seek the face of the Lord, how do we find Him? The answer is a hard one - for me it was the most difficult of "TULIP".

If we, in our sin, do not have the ability to seek after God, then it must be God that seeks after us.

That is the "U" - unconditional election. Predestination.

Blessed be the God and Father of our Lord Jesus Christ, who has blessed us in Christ with every spiritual blessing in the heavenly places, even as he chose us in him before the foundation of the world, that we should be holy and blameless before him. In love he predestined us for adoption as sons through Jesus Christ, according to the purpose of his will, to the praise of his glorious grace, with which he has blessed us in the Beloved (Eph 1:3-6 ESV)

Logic tells us that if we are steeping in the "T", we cannot seek God.  We are chosen in Christ.

Our election is not based on the good that we have done - it is unconditional upon our behavior.

It is the very idea of our salvation NOT being rooted in ourselves that points to the glory of God.  Our salvation is not of ourselves, it is by grace; faith is the vehicle that God has chosen.

It is not of works.  We are chosen.

Organization of the Week: Snowflakes Adoption:

When a family has been successful in having a child through in vitro fertilization, remaining embryos are often cryo-preserved. This results in the question of what to do with the remaining embryos. These frozen embryos can be the hope of a child for an infertile couple.

But if John McCain said this -- if he mistakenly said he'd visited 57 states..and had 1 more to go...while still missing Alaska and Hawaii???? -- the media would be all up in his grill, accusing him of a senior moment. A double standard???

Clinton and Obama are getting tired.

What would you do if your pastor was in error?

I'd go to the pastorate. And to the board...and to the denomination. And eventually I'd leave, but stay in contact with a pastor in the same classis.

Seven years ago, on Mother's Day, my daughter was baptized. 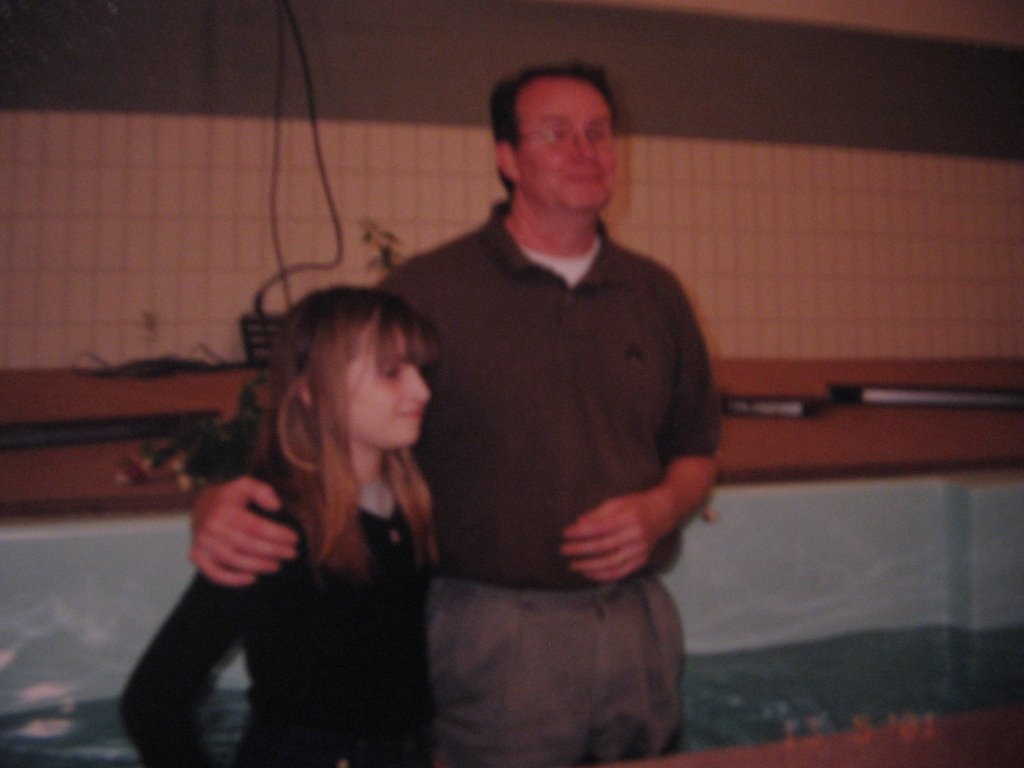 Part of my "Ancient History" - we were still in the Nazarene church and it was part of my "former life". I rarely have a "perfect" diet and fitness day...

As presumptive Republican presidential candidate John McCain touches down in Michigan today for a fund-raiser and town hall meeting in Oakland County, some leaders in metro Detroit's Arab- and Muslim-American community are demanding an apology from the Arizona senator.

The leaders said Monday that they are insulted that McCain's campaign severed ties with political activist and businessman Ali Jawad, the founder of the Lebanese American Heritage Club.

And who wants what?

A group of Arab-American and Muslim leaders said Monday they want John McCain's campaign to apologize for cutting ties with an Arab-American businessman serving on the GOP presidential candidate's Michigan finance committee. (emphasis mine)

Schlussel said among her concerns about Jawad were two federal cases involving him and his company: He was convicted in 1997 in U.S. District Court in Detroit for insurance fraud and sentenced to probation. His company was convicted the same year of mail fraud and was ordered to pay more than $250,000 in fines and restitution.

She also alleges that he has met with Hezbollah leaders and Hezbollah-allied members of the Lebanese parliament on two trips to Lebanon.

"John McCain did the right thing by asking Ali Jawad to leave," she said.

For his part, Jawad said he wasn't forced into resigning. He asked to be removed from the committee after receiving two calls from the McCain campaign inquiring about the allegations and questioning his "integrity and loyalty to this country."

1) Schlussel has been involved in many political scuffles and anything she writes should be investigated (meaning both her sources and her content). If you take her word for an accusation such as this one - you might get hung out to dry.

2) Jawad is a convicted fraud.

3) If every political campaign weeded out all of the convicts (such as this one)...the political arena would be a much different place.

5) If Jawad asked to be removed from the committee based on mere questioning...that does seem like a smoking gun.

6) Either way, he was not removed by McCain. He asked to be removed. Is an apology in order? If the questioning were only following up on rumors - no.

Following up on rumors like this one is what a responsible campaign does.

(the above is a merged panorama of three photos.) It matters because if there is some little bit of good in us, then we can somehow try to earn our salvation.

Mormons say, "For we labor diligently to write, to persuade our children, and also our brethren, to believe in Christ, and to be reconciled to God; for we know that it is by grace that we saved, after all we can do." (II Nephi 25:22) - emphasis mine

Total depravity matters, because if we can earn our salvation, there is no need for a savior.

We are not just a little "sick", so that we can get better and so attain salvation.

No - we are DEAD in our sin. We can no more walk toward our own salvation than Lazarus was able to walk out of his tomb before Christ called him.

It is not until we understand the depth of our sin that we can fully understand our need for our Saviour.

How Deep The Father’s Love For Us

Behold the Man upon a cross
My guilt upon His shoulders
Ashamed, I hear my mocking voice
Call out among the scoffers

I will not boast in anything
No gifts, no powr's, no wisdom
But I will boast in Jesus Christ
His death and resurrection

Why should I gain from His reward?
I cannot give an answer
But this I know with all my heart
His wounds have paid my ransom